This document provides an overview of the template form. This form derives its importance from the fact that this form is the starting point of all development involving forms. The document highlights the importance of Template.fmb in forms development and also provides a detailed explanation of the various components of the Template form. 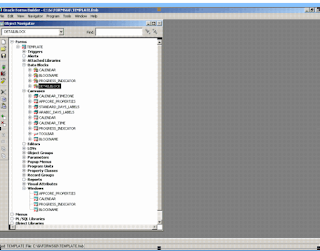 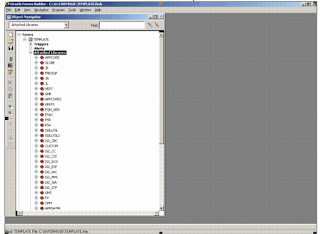 Each of these libraries is explained in detail below.
APPCORE
APPCORE contains the packages and procedures that are responsible for the standard ‘Oracle Applications’ behavior of the forms. The forms have to support the menu, toolbar, and other required standard behaviors in compliance with oracle applications.

APPCORE also contains various other utilities for exception handling, message levels, and so on.


APPDAYPK
The APPDAYPK library contains the packages that control the Oracle Applications Calendar feature. The calendar (or the date picker) is a utility that oracle apps provide to pick the dates for a date type field.
FNDSQF
FNDSQF contains packages and procedures for Message Dictionary, flexfields, profiles, and concurrent processing. It also has various other utilities for navigation, multicurrency, WHO, etc. 23–4 Oracle Applications Developer’s Guide Procedures and functions in FNDSQF typically have names beginning with ”FND”.
Other Libraries
The template form also contains a few other libraries that are not linked directly to the template form, but are linked to the three libraries listed above. Although, while using the form it makes no difference whether the library is linked directly to template or to another library that is linked to template. These are discussed below.
CUSTOM library:
The CUSTOM library (CUSTOM.pll) is probably the most widely used and customized in the libraries attached to the template form. This library allows extension of Oracle Applications forms without modification of Oracle Applications code.

Any form goes to the CUSTOM.pll whenever any event fires on the form. Code can be written in the CUSTOM.pll with the logic branching based on the form, block and trigger on which you want it to run.
You can use the CUSTOM library for customizations such as Zoom (such as moving to another form and querying up specific records), enforcing business rules (for example, vendor name must be in uppercase letters), and disabling fields that do not apply for your site.
GLOBE:
The GLOBE library allows Oracle Applications developers to incorporate global or regional features into Oracle Applications forms

take effect based on these events. The GLOBE library calls routines in