Home » Others » Happy Women's Day
Others

International Women's Day (IWD), originally called International Working Women's Day, is celebrated on March 8 every year.
In different regions the focus of the celebrations ranges from general celebration of respect, appreciation, and love towards women to a celebration for women's economic, political, and social achievements

The political and human rights theme designated by the United Nations runs strong, and political and social awareness of the struggles of women worldwide are brought out and examined in a hopeful manner. Some people celebrate the day by wearing purple ribbons.

Theme of woman's day 2019:The theme for International Women’s Day 2019, which will take place on 8 March, is “Think equal, build smart, innovate for change” 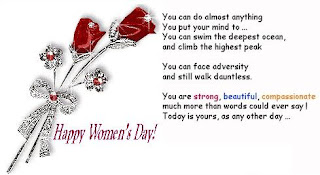 A charming woman doesn't follow the crowd. She is herself. - Loretta Young
A woman's guess is much more accurate than a man's certainty. - Rudyard Kipling