Home » Others » Special Edition :Story behind ribbon-cutting ceremony
Others 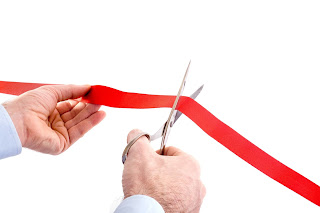 A ribbon cutting ceremony is a public ceremony conducted to inaugurate the opening to the general public of a new building or business or a company or any new establishment.
Often, the ceremony is conducted in just the manner the name suggests: by tying a ceremonial ribbon across the main entrance of the building, which is then cut in a ritual manner by a dignitary to declare the building open for business.
Frequently, celebrity guests or local political leaders will be invited to do the honors and cut the ribbon, especially if the building is a public building, hospital, or similar public works. Ribbon cutting ceremonies are also conducted to open businesses, in which case it is likely that the owners or executives of the business will do the honors. In either case, members of the media will likely be invited to photograph or broadcast the staged event.
The scissors used in a ribbon cutting ceremony are frequently preserved by the institution as a keepsake.
Tradition
Ribbon cuttings have long been traditional components of European wedding ceremonies. In France, the bride might cut ribbons that have been stretched across the road as her groom escorts her to the church, which symbolizes the couple overcoming obstacles together. In Italy, the bride or her father might cut a ribbon that has been stretched across the door of the family home, symbolizing her newfound freedom and leaving her life as a maiden behind.
History
Modern ribbon-cutting ceremonies begin to appear in historical accounts at the end of the 19th century. According to Union Parish, La. archives, a ribbon-cutting ceremony was held around 1898 for the opening of a railroad line in northern Louisiana. The ceremonies became more common throughout the 1900s. Prominent ribbon cuttings include the opening of the Disneyland Monorail in 1959 and the opening of the World Trade Center in 1973.