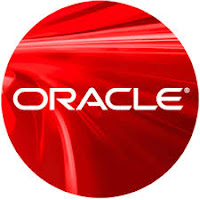 We would like to make a modification to this list. The idea is to modify the list based on the responsibility so that different responsibilities get access to different suppliers. So we have decided to show all suppliers whose names start with A if the Oracle user has logged into the responsibility that starts with XXEBIZ
Personalization Steps
On the AP Invoice form click on Help > Diagnostics > Custom Code > Personalize
Enter a new personalization as shown below 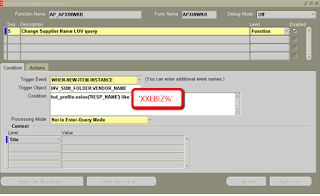 Logic:
The triggering condition is when the user clicks on the Supplier Name field on the form. Hence the Trigger Event is WHEN-NEW-ITEM-INSTANCE and the Trigger Object is INV_SUM_FOLDER.VENDOR_NAME. The condition of personalization checks whether in the logged in responsibility starts 'XXEBIZ%/ with or not

Action 2: Set the new data set to the LOV

The previously created data set is now attached to the LOV which is called from the Supplier Name field.
Important:
How do we know the query of the record group that needs to be changed? The structure of the query has to be perfect else the form will throw an error each time we try to access the LOV.
To find the original structure of the query we need to open the form in Forms builder. We have come to know the name of the form from Personalization form itself. It is APXINWKB.fmb. You will find the form under $AU_TOP/forms/US folder on the server.
We need to know the name of the original record group being used on the form. On Action 2 of the personalization step above we shall remove the Value as shown below,

with the crated GROUP_NAME -->XX_VENDOR_NAME
and test the form.