Home » Others » Happy Friendship Day
Others

History of  friendship day:
Initially created by the greeting card industry, evidence from social networking sites shows a revival of interest in the holiday that may have grown with the spread of the Internet, particularly in India, Bangladesh, and Malaysia. Digital communication modes such as the Internet and mobile phones may be helping to popularize the custom, since greeting friends en masse is now easier than before. Those who promote the holiday in South Asia attribute the tradition of dedicating a day in honor of friends to have originated in the U.S. in 1935, but it actually dates from 1919. The exchange of Friendship Day gifts like flowers, cards and wrist bands is a popular tradition of this occasion.
Friendship Day celebrations occur on different dates in different countries. The first World Friendship Day was proposed for 30 July in 1958, by the World Friendship Crusade.[On 27 April 2011 the General Assembly of the United Nations declared 30 July as official International Friendship Day. However, some countries, including India, celebrate Friendship Day on the first Sunday of August. In Oberlin, Ohio, Friendship Day is celebrated on 8 April each year. 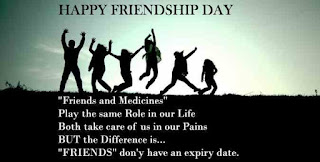